San Bernardino has partnered with the City of Rialto to improve Pepper Avenue between Mill Street and Base Line Street.  The work to be undertaken will encompass a two-mile section of roadway that spans both cities and San Bernardino City Council wards 3 and 6.

“Residents have been asking for Pepper Avenue to be improved for some time,” said City Manager Robert D. Field. “We are pleased to be working with the City of Rialto to make this happen.”

Hillcrest Construction, who was awarded a $5 million contract, will replace pavement and install ADA accessible ramps and new sidewalks to connect existing gaps.

“The Cities entered into an agreement in May of 2020 to jointly fund the costs associated with improving Pepper Avenue,” said San Bernardino Public Works Director Daniel Hernandez. “This includes the project design, construction, inspection, and administration. The City of San Bernardino was designated as the lead agency for the project and Rialto will reimburse San Bernardino 50% of the total cost.”

Funding for San Bernardino’s portion of the project will come from Measure I funds, the County sales tax measure passed by voters in 1989 and 2004 for road and transportation improvements.

Work is expected to begin later this year and be completed by mid-2023. 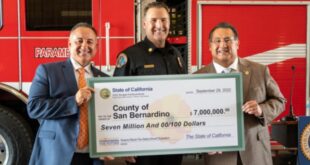